The Right Honourable David Willetts MP, the Minister for Universities and Science, today (Thursday 3 February) paid a visit to the award-winning interactive science centre for children – Centre of the Cell. 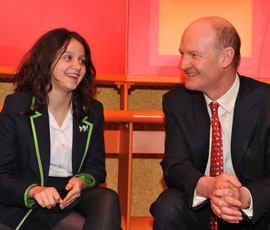 Located inside Queen Mary, University of London’s futuristic Blizard building in Whitechapel, Centre of the Cell is the first facility of its kind to be based within a working medical school research laboratory. Its powerful audiovisual displays; interactive games; hands-on virtual experiments, and high-power microscopes – all geared towards connecting science to everyday life – have earned it a cluster of accolades and awards since launching in September 2009.

So far a huge hit with teachers and school children alike - having attracted over 18,000 visitors in its short history – the Centre has recently opened its doors on Saturdays encouraging parents to bring their children, and the wider public to visit.

David Willetts MP enjoyed a tour of the impressive laboratories inside the Blizard Institute as well as being shown around the Centre of the Cell by its Director Professor Francis Balkwill OBE.

Minister for Universities and Science David Willetts said: “The UK is one of the best places in the world for science and innovation, and to make the most of this we need to foster a new generation of researchers. That’s why it’s so important to have great facilities that give people the opportunity to engage with science from a young age.”

Centre of the Cell is free to visit.