Dangerous levels of salt in your family’s favourite sausages

Great British bangers could contain half your maximum daily recommendation of salt, putting your health at risk, a new survey from researchers at Queen Mary, University of London shows. 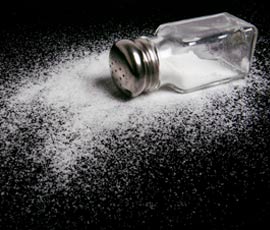 Sausages are an everyday favourite, and a new survey of 300 sausages showed that many are still shockingly high in salt.  By starting the day with two high salt sausages at breakfast, you could unexpectedly be eating nearly half of your daily recommended maximum of 6g salt.  Consensus Action on Salt and Health (CASH) carried out new research looking at fresh and frozen meat, chipolata and vegetarian sausages and identified that unnecessary salt is still being hidden in leading brand sausages.

The Five highest salt popular sausages per 100g on the label:

You may expect the more expensive sausages to have fared better, however CASH found that despite a nine fold difference in the price of sausages (per 100g), there was no notable difference in the salt content of economy versus standard or premium supermarket ranges, which is good news for those on a budget.

“Sausages are such a British favourite at mealtimes, that they are the third largest individual contributor of salt in the UK die” says Katharine Jenner, Campaign Director and Nutritionist at CASH. “It is possible to eat much less salt by reading the label: we found enormous differences in salt content of sausages, regardless of the flavour, cost or meat content, showing that the hidden salt is completely unnecessary.”

CASH would advise you to look at front of pack labels when they are available and, as a guide, try to choose products containing one gram or less salt per 100g, or about 0.5g per sausage.  Of the meat sausages surveyed (excluding chipolatas), only seven out of 246 (three per cent) contain less than 0.5g per sausage, the amount of salt found in a packet of crisps, for instance Weight Watchers Premium Pork Sausages contain just 0.4g per sausage. Disappointingly it is not always clear to see how much salt sausages contain; one in four (25 per cent) products have no front of pack labelling.  Our research showed that more than one in five (22 per cent) products would be given a red light for salt if traffic light labelling was used while only one, a Quorn product, would be given a green light.

Examples of supermarket sausages with 1g or less salt per 100g on the label:

“That there is so much salt still in our sausages is a scandal” says Professor Graham MacGregor of the Wolfson Institute of Preventive Medicine, Queen Mary, University of London and Chairman of CASH. “Salt puts up our blood pressure, leading to strokes, heart disease, osteoporosis and kidney disease, we should all be eating less than 6g of salt a day.  The UK is leading the world in salt reduction, but whilst there are food manufacturers filling our favourite foods such as sausages with salt, our health is at risk.”