People who cycle through London and other major cities have higher levels of black carbon in their airway cells, according to research from Queen Mary, University of London. 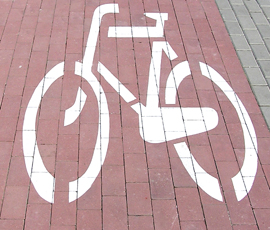 The research, which will be presented at the European Respiratory Society's Annual Congress in Amsterdam, suggests that cyclists inhale more black carbon than pedestrians, which may cause damage to the lungs.

The combustion of fossil fuels results in the generation of large numbers of inhalable particles of soot. There is increasing evidence that inhalation of these black particles is associated with a wide range of health effects - including heart attacks and reduced lung function.

To test this theory the study compared the lung dose of black carbon in cyclists and pedestrians. To measure lung dose the researchers sampled lower airway cells called airway macrophages - specialised cells that sit on the airway surface and ingest foreign material.

The researchers collected sputum samples from five adults who regularly cycled to work in London along with five pedestrians and analysed the amount of black carbon found in their airway macrophages. All participants in the study were non-smoking, healthy, urban commuters aged between 18 and 40 years.

The results showed that in this small sample, cyclists have 2.3 times more black carbon in their lungs when compared with pedestrians. The probability that this difference occurred by chance is less than one in 100.

Dr Chinedu Nwokoro, one of the researchers who worked on the study and an active cyclist, said: "The results of this study have shown that cycling in a large European city increases exposure to black carbon. This could be due to a number of factors including the fact that cyclists breathe more deeply and at a quicker rate than pedestrians while in closer proximity to exhaust fumes, which could increase the number of airborne particles penetrating the lungs. Our data strongly suggest that personal exposure to black carbon should be considered when planning cycling routes. Whether cycling by healthy individuals is in itself associated with adverse health effects is currently being assessed in a larger ongoing study."