Cigarettes, diet, alcohol and obesity behind more than 100,000 cancers

More than 100,000 cancers – equivalent to one third of all those diagnosed in the UK each year – are being caused by smoking, unhealthy diets, alcohol and excess weight, according to new research from Queen Mary, University of London. 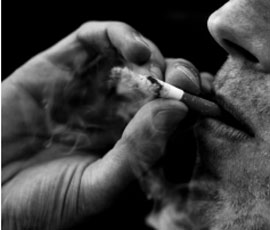 This figure further increases to around 134,000 when taking into account all 14 lifestyle and environmental risk factors analysed in this study.

This new review of cancer and lifestyle in the UK is the most comprehensive undertaken to date and is published in a supplement to the British Journal of Cancer.

Smoking is far and away the most important lifestyle factor causing 23 per cent of cancers in men and 15.6 per cent in women (nearly one in five cancers).

Professor Max Parkin, a Cancer Research UK epidemiologist based at Queen Mary, University of London, and study author, said “Many people believe cancer is down to fate or ‘in the genes’ and that it is the luck of the draw whether they get it.

“Looking at all the evidence, it’s clear that around 40 per cent of all cancers are caused by things we mostly have the power to change.

“We didn’t expect to find that eating fruit and vegetables would prove to be so important in protecting men against cancer. And among women we didn’t expect being overweight to have a greater effect than alcohol.

“In most cases cancers have multiple causes – for example a cervical cancer can be linked to both HPV infection and smoking. This means it isn’t possible to add up the effects of different lifestyle factors – you’d get more than 100 per cent.” ***

In this study, the top six risk factors were calculated as follows (the number of cases has been rounded to the nearest hundred).

Overall, one in 25 cancers is linked to occupation and one in 33 to infections.

It is estimated that tobacco smoking, dietary factors, drinking alcohol and bodyweight account for 106,845 or 34 per cent of cancers occurring in 2010.  This is based on predicted numbers of cancer cases in 2010, using UK incidence figures for the 15-year period from 1993 to 2007.

Sara Hiom, director of information at Cancer Research UK, said: “We know, especially during the Christmas party season, that it is hard to watch what you eat and limit alcohol and we don’t want people to feel guilty about having a drink or indulging a bit more than usual. But it’s very important for people to understand that long term changes to their lifestyles can really reduce their cancer risk.”

Dr Harpal Kumar, Cancer Research UK’s chief executive, said: “Leading a healthy life doesn’t guarantee that a person won’t get cancer but this study shows that healthy habits can significantly stack the odds in our favour.

“While we have made tremendous progress in improving the chance of surviving cancer during the last 40 years, we need to make sure people are made aware of the risks of getting the disease in the first place so they can make the healthiest possible lifestyle choices.

“We know that cancer risk can be affected by family history and getting older, but these figures show that we can take positive steps to help reduce our risk of the disease. Stopping smoking, eating a balanced diet, cutting down on alcohol and maintaining a healthy weight could be New Year’s resolutions that help save more lives in future.”