The research team of Denise Sheer, Professor of Human Genetics has been awarded the Jass prize by the Pathological Society and the Journal of Pathology. 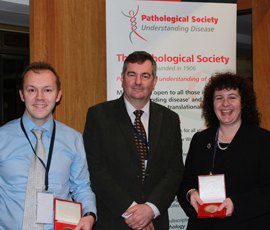 The annual prize was instituted in memory of the late Jeremy Jass and is awarded to the authors of the paper judged by the editorial team to have been the best published in the Journal of Pathology in the prior calendar year.

The team received the Jass award for their paper Activation of the ERK/MAPK pathway: a signature genetic defect in posterior fossa pilocytic astrocytomas. It describes the results of an international collaboration between the researchers at Queen Mary, University of London, St Jude Children’s Research Hospital, Memphis, Tennessee and the Royal Victoria Infirmary, University of Newcastle.

The award was formally made at this month’s winter meeting of the Pathological Society. All authors received certificates whilst the joint first authors, Tim Forshew and Ruth Tatevossian, also received commemorative medals.