The young winners of a science competition run by Queen Mary, University of London, the Metro newspaper and the UK Space Agency, have won the chance to create a magazine for school children interested in space exploration.

Their publication, Ticket to Mars, will be officially launched at the Houses of Parliament in December. 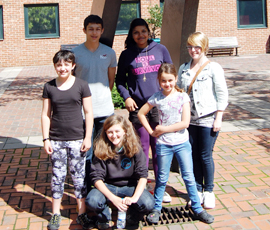 The School of Physics and Astronomy and its partners opened a competition in December 2010 called Cosmic Futures to highlight the UK’s leading role in the space industry. Science enthusiasts under the age of 18 were asked to create a poster or write an essay on why Britain is at the forefront of Space science.

They explored London’s Science Museum and met “Bridget”, a robot designed to explore Mars, before spending a day at Queen Mary working on the magazine with graphic designers and Professor Peter McOwan from the School of Electronic Engineering and Computer Science.

Their publication, which is aimed at 12-14-year-olds, will be produced, printed and distributed by Queen Mary to schools nationwide.

Describing their experience, Kathryn Coldham, aged 15, said: “Today, the other UK Cosmic Futures Competition winners and I worked together to design and plan the content of a new children’s science magazine. We spent the day at the Mile End campus of Queen Mary deciding on the layout, colours, articles and extras which will be featured in the eight pages of the magazine.”

Another winner, sixteen-year-old Natalie Hogg, was amazed at how “more goes into a magazine than you could ever imagine, especially one about Mars."

Nineteen-year-old student Sarah Avery, who won a similar competition back in 2006, assisted the winners in planning the magazine and was impressed with the “brilliant minds” and “hundred of new ideas” of the competition winners.

The students will now spend the next two weeks writing articles, collecting images and editing the magazine. It will be distributed to UK schools in October.