A research team including scientists from Queen Mary, University of London has generated the first whole-genome sequencing data of the naked mole-rat, a rodent that is resistant to cancer and lives for more than 30 years. 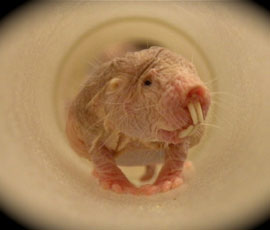 The naked mole-rat is native to the deserts of East Africa and has unique physical traits that allow it to survive in harsh environments for many years.  It has a lack of pain sensation in its skin and has a low metabolic rate that allows it to live underground with limited oxygen supply.

For the first time, scientists have sequenced the genome of the naked mole-rat to understand its longevity and resistance to diseases of ageing.  Researchers will use the genomic information to study the mechanisms thought to protect against the causes of ageing, such as DNA repair and genes associated with these processes.

The project was led by Dr Joao Pedro Magalhaes from the University of Liverpool, who worked with Dr Chris Faulkes from Queen Mary, University of London. Queen Mary is home to the UK's only naked mole rat colony.

Dr Faulkes, from Queen Mary’s School of Biological and Chemical Sciences was keen to help with this project as the genome will be a valuable research tool. He explained: "We're interested in how the animals evolved their amazing social behaviour. They live in groups of up to 300 animals and each group has a [reproductively active] queen who can 'switch off' the reproduction in other animals." These findings will allow Dr Faulkes and his team to find any features of the rats' brains that might drive these unusual social bonds and behaviour.

To date, cancer has not been detected in the naked mole-rat.  Recent studies have suggested that its cells possess anti-tumour capabilities that are not present in other rodents or in humans.  Researchers at Liverpool are analysing the genomic data and making it available to researchers in health sciences, providing information that could be relevant to studies in human ageing and cancer.

Dr Joao Pedro Magalhaes, from the University of Liverpool’s Institute of Integrative Biology, added: “The naked mole-rat has fascinated scientists for many years, but it wasn’t until a few years ago that we discovered that it could live for such a long period of time. It is not much bigger than a mouse, which normally lives up to four years, and yet this particular underground rodent lives for three decades in good health.  It is an interesting example of how much we still have to learn about the mechanisms of ageing.

The work follows the launch of an online database detailing the life history of more than 4,000 animal species.  The online resource, which is the most extensive and complete record of animal longevity, details the maximum and average lifespan of an animal, its weight, age of sexual maturity, litter size and other life history traits. It can be used to examine why different species age at different rates in order to further understanding of the mechanisms of ageing.