Research has shown that light is the key to getting our ‘body clocks’ back in sync and now a new study exploring the resynchronisation mechanism in insects has discovered a molecule essential to the process. 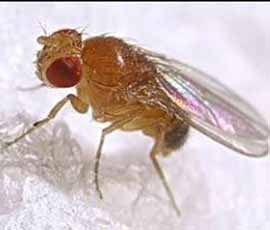 Scientists explored the impact of light on fruit flies (pictured)

Researchers from Queen Mary, University of London looked at the impact of light on the circadian clocks (commonly known as ‘body clocks’) of fruit flies. They identified a novel molecule, QUASIMODO (QSM), which was intrinsically involved in relaying light-information to the flies’ inner clocks.

Ralf Stanewsky, Professor of Neurobiology at Queen Mary’s School of Biological and Chemical Sciences who led the research, explained: “Circadian clocks regulate rhythmic biological processes in many organisms. A famous example is our sleep/wake cycle.

“It is regulated by our internal clock, which tells us when to go to bed and when to wake up. If you bring your clock out of sync with the external time, for example when you fly from London to New York, your internal clock still sends you to sleep according to London time.

“This shows that we indeed have a timer in us and that this timer needs to be reset like a normal wrist watch when you move to a different time zone or if you’re a shift worker and need to adjust your sleep/wake cycles accordingly.”

Professor Stanewsky had previously isolated a specialised circadian photoreceptor named CRYPTOCHROME (CRY) which is active directly within the clock neurones of flies’ brains.

“Both insects and mammals use visual photoreceptors [i.e. those responsible for the ability to see] and specialised circadian photoreceptors, to synchronise the inner body clock,” he said.

“In analysing the CRY receptor we realised there must be additional ways how light is transmitted to the circadian clock. When we investigated further we found that the novel molecule QSM is involved.

“We isolated the quasimodo gene in a genetic screen for novel timing genes, and found that the amount of QSM protein drastically increased in response to light. This results in a decrease of an important timing protein (named TIMELESS, or TIM) within the circadian clock and when QSM levels were decreased, the TIM protein was stabilised, even when the flies were continuously exposed to light.”

The daily fluctuating levels of TIM protein are indicative of the ‘time of day’ and tell the fly when to be active or not.  Since TIM levels are regulated by QSM, and QSM is regulated by light, this is an elegant and novel way to reset the clock according to the daily changes of light and darkness.

“QSM appears to be integral to the synchronisation of the circadian clock in flies and it will be interesting to see if a similar mechanism or molecule helps to synchronise our human circadian clock to light,” Professor Stanewsky said.

The research was published in the journal Current Biology.