New software has been developed at Queen Mary, University of London’s Centre for Digital Music, giving drummers the freedom to speed up or slow down the pace of any pre-programmed music, the material following their lead. 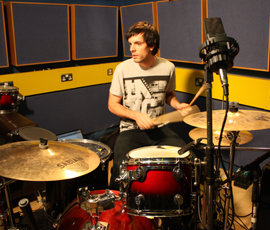 It means that drummers will no longer have to keep time with a click track and the set beat of pre-recorded tracks that are used during many live performances and studio sessions.

The software has been developed by Dr Andrew Robertson from Queen Mary, University of London’s School of Electronic Engineering and Computer Science. Dr Robertson’s work has been funded by the Engineering and Physical Sciences Research Council (EPSRC). He is a Royal Academy of Engineering/ EPSRC Research Fellow at the university.

Called B-Keeper (short for Beat-Keeper), the software will give drummers the ability to add much more ‘feel’ and spontaneity to performances.

Currently, many bands in the studio and at gigs use click tracks consisting of metronome-like clicks fed to the drummer via earphones.

They are needed because bands commonly now integrate significant amounts of pre-programmed music (e.g. created by sequencers*) into their songs. Unless the drummer keeps a precise, predetermined rhythm, the pre-programmed material will not synchronise properly with the rest of the music.

But by providing a rhythmic straitjacket, a click track gives the drummer no freedom at all to vary the rhythm and means they cannot speed up or slow down, for example in response to the mood of a crowd at a gig or because they ‘feel’ the music differently from a previous performance.

With B-Keeper, the drummer can speed up or slow down by around 5% and still keep pre-programmed parts of the music in line with the beat.

Dr Robertson is a keen guitarist and B-Keeper has now been successfully trialled by his own ‘space rock’** band, Higamos Hogamos.

“We’ve used B-Keeper at gigs in the UK, Belgium and Luxembourg, and it makes a noticeable difference in terms of helping to create a better atmosphere and letting the band feed off and bond with the crowd”, says Dr Robertson. “Our studio work is also benefiting from the flexibility B-Keeper gives us when we’re recording our material.”

But there is also an important socio-economic dimension to this breakthrough. Lots of young people are looking to make a profitable career out of music. However, these days many musicians make more of a living from live performances than music sales. The spontaneity that B-Keeper adds to performances therefore gives them more scope to build up a loyal live following who will get to see a different performance every time. It will also help them to produce studio recordings that have more ‘soul’ than is possible using a traditional click track.

A new MaxForLive version of the software is available at B-Keeper.org. Dr Robertson now aims to simplify the software with a view to making it commercially available within the next 12 months.

In the future it may even be possible to use B-Keeper to synchronise not only all the musical elements of a song but also lighting shows at gigs.

*A sequencer records and plays back music played by a musician.

**Space rock is a form of music that incorporates elements of rock ‘n’ roll, electronica, Kosmische and psychedelia.