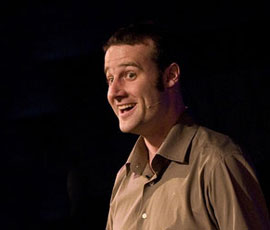 The Josh Award recognises up-and-coming talent in the science communication field, and innovative approaches to engage the public with science. Well known for his comedic maths routines and maths shows, Matt's media work and innovative practices in promoting maths wowed the judging panel.

Matt was nominated by Professor Peter McOwan, Dean for Taught Programmes at Queen Mary. He commented: “It’s been brilliant working with Matt over the past few years; his talented and enthusiastic communication of maths and science is just the sort of thing we want to support here at Queen Mary. I'm delighted he has won this award, it’s very well deserved.”

Matt will be presented with the Award on Sunday 23 October at the Your Days Are Numbered: the maths of death event he is performing at during Manchester Science Festival (22 - 30 October 2011).

Matt commented on his award: “I'm honoured to win the Josh Award from the Manchester Science Festival because of its ongoing role in raising awareness of the good work many people are doing in science communication. Without countless people working hard around the country to promote mathematics in an engaging fashion, we will miss out on a generation of potential top mathematicians.”

His award will also see Matt take on the role of Science Communicator in residence for the Manchester Science Festival 2012.