Making a bee-line for the best rewards

Bumblebees use complex problem solving skills to minimise the energy they use when flying to collect food, according to new research from Queen Mary, University of London. 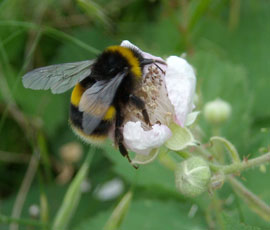 For the bumblebee (Bombus terrestris), as with many other animals, the simplest approach to finding more nectar would be to fly to the nearest neighbouring flower, particularly considering their tiny brain size. But a team from Queen Mary’s School of Biological and Chemical Sciences has found that this isn’t the case.

The research team arranged six artificial flowers in a flight arena so that the bees would have to follow an unnecessarily long route when flying between nearest neighbour flowers to collect nectar. They watched the bees as they carried out 80 foraging bouts, and recorded which flowers they visited and in which order.

Writing in the journal Biology Letters, Dr Mathieu Lihoreau and colleagues report how, over 640 flower visits, the bees significantly reduced their flight distances as they learned the position of each flower within the array. Surprisingly, the bees almost never followed a nearest-neighbour strategy (in which the bee would fly to the nearest unvisited flower until all flowers are visited). Instead they prioritised following the shortest possible route by learning and memorising individual flower locations.