Kepler Listens to an Orchestra of Solar-Type Stars

An international team measuring the properties of stars across the universe has been able to listen to sounds from 500 stars similar to the Sun, using data from the NASA Kepler Mission. 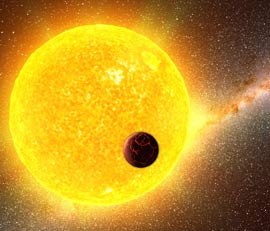 The team, which involves Dr Graham Verner from Queen Mary, University of London, used the data to measure the stars’ properties and will now be able to compare their findings with predictions based on models of the Milky Way galaxy.

The research is published today (7 April 2011) in the journal Science.

The Kepler spacecraft is monitoring the brightness of more than 150,000 stars in the Cygner-Lyrae constellations of our galaxy.  Its data are being used to search for planets and also to monitor the natural oscillations of the stars, the field of asteroseismology.  The oscillations lead to miniscule changes or pulses in brightness, and are caused by sound trapped inside the stars.

Dr Verner, from Queen Mary’s School of Mathematical Sciences, said: “It’s been incredible to be able to measure and weigh the stars through the sounds they make – all from the data produced by the Kepler Mission. We will now be able to create a much more accurate picture of the stars in our galaxy.”

Dr Bill Chaplin from the University of Birmingham’s School of Physics and Astronomy, who leads the international collaboration, said: “The sound inside the stars makes them ring or vibrate like musical instruments.

“Previously astronomers have predicted the population of stars in the Milky Way by creating computer models of the stars and planets.  It has been difficult to verify aspects of these models in great detail due to lack of data and levels of precision.

“We now have the tools to be able test and interrogate the models in much more detail than we could before, to build an accurate picture of star populations in our galaxy.”

The team, which is part of one of the biggest international collaborations in astronomy, the Kepler Asteroseismic Science Consortium (KASC), found 500 stars that ring like the Sun.

Dr Hans Kjeldsen from Aarhus, who coordinates KASC, said: “Before Kepler we had asteroseismic data on only about 20 such stars.  We now have an orchestra of stars to play with, and this opens up huge possibilities for probing stellar evolution and obtaining a clearer picture of the past and future of our own Sun and how our galaxy, and others like it, has evolved over time.

“We can, for example, pick out stars that weigh the same as the Sun but have different ages, to, in effect, follow the Sun in time.”