It is a mathematical puzzle which has vexed academics and travelling salesmen alike, but new research from Queen Mary's School of Biological and Chemical Sciences can reveal how bumblebees effectively plan their route between the most rewarding flowers while travelling the shortest distances. 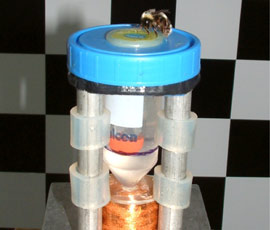 The research, led by Dr Mathieu Lihoreau and published in the British Ecological Society’s journal Functional Ecology, explored the movement of bumblebees, Bombus terrestris, as they collected nectar from five artificial flowers varying in reward value.

“Animals which forage on resources that are fixed in space and replenish over time, such as flowers which refill with nectar, often visit these resources in repeatable sequences called trap-lines,” said Dr Lihoreau, “While trap-lining is a common foraging strategy found in bees, birds and primates we still know very little about how animals attempt to optimise the routes they travel.”

Research into optimising routes based on distance and the size of potential rewards is reminiscent of the well known Travelling Salesman problem in mathematics, which was first formulated in 1930, but remains one of the most intensively studied problems in optimisation.

“The Travelling Salesman must find the shortest route that allows him to visit all locations on his route,” explained co-author Dr Nigel Raine, “Computers solve it by comparing the length of all possible routes and choosing the shortest. However, bees solve simple versions of it without computer assistance using a brain the size of grass seed.”

The team set up a bee nest-box, marking each bumblebee with numbered tags to follow their behaviour when allowed to visit five artificial flowers which were arranged in a regular pentagon. “When the flowers all contain the same amount of nectar bees learned to fly the shortest route to visit them all,” said Dr Lihoreau. “However, by making one flower much more rewarding than the rest we forced the bees to decide between following the shortest route or visiting the most rewarding flower first.”

The results revealed a trade-off between either prioritising visits to high reward flowers or flying the shortest possible route. Individual bees attempted to optimise both travel distance and nectar intake as they gained experience of the flowers.

“We have demonstrated that bumblebees make a clear trade-off between minimising travel distance and prioritising high rewards when considering routes with multiple locations,” concluded co-author Professor Lars Chittka. “These results provide the first evidence that animals use a combined memory of both the location and profitability of locations when making complex routing decisions, giving us a new insight into the spatial strategies of trap-lining animals.”