Female deer do not always choose the bigger and dominant males to mate with, scientists from Queen Mary, University of London and Hartpury College have found. 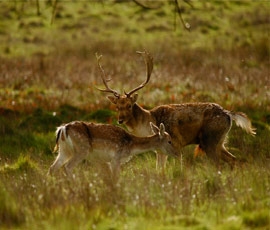 The research, which was undertaken in Dublin’s Phoenix Park on a herd of fallow deer, focussed on females who chose not to mate with the ‘top’ males.

The study, published today (6 April) in PLoS ONE found that yearling females tended to mate with a higher proportion of younger, lower ranking males while older females actively avoided mating with them.

Alan McElligott, co-author on the study from Queen Mary, University of London said: “The findings of this study have important implications for assessing the effects of sexual selection on evolution.

“In the past, studies very much focussed on the ‘big’ males in these types of species and why the vast majority of females mated with them. We focussed instead on matings from the female perspective.”

Scientists demonstrated that yearling female fallow deer mate later in the breeding season than older females, with the first yearlings not mating until eight days after the start of the season.

“This difference in yearling female matings meant that a small but consistent proportion of them do not mate with the "big and dominant" males each year.

“This indirect mate choice could result from yearling females recognising the difficulty in carrying a ‘big’ male’s offspring to term, but it could also be because those males are worn out by the time the yearlings are ready to mate.

“There are many possibilities as to why the yearlings display an indirect mate choice, and inexperience and their smaller body size compared to older females could also be factors.

“This interesting mate selection gives us a unique insight into evolution, providing an explanation as to why we’re not seeing the male deer rapidly increase in size over time.”