New methods of studying face perception that could help scientists to create the next generation of life-changing software and robots, will go on show at the Royal Society’s Summer Science Exhibition which opens today (5 July 2011). 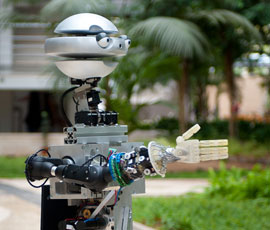 Emys - one of the robots being developed by the LIREC consortium

Your brain processes lots of tiny and subtle clues about faces whenever you interact with other people, and now scientists from Queen Mary, University of London and UCL (University College London) are investigating whether robots and computers can learn to do the same thing.

The team will showcase their work as part of the annual exhibition which runs from 5 – 10 July 2011. Visitors will be able to see how the brain understands faces, what their faces look like when they switch gender, how to transfer motions from one person’s face to another and see state of the art computer vision systems that can recognise facial expressions.

Professor Peter McOwan, from the School of Electronic Engineering and Computer Science at Queen Mary, University of London, explains: “We will be showing some of the latest research from the EU funded LIREC project, which aims to create socially aware companion robots and graphical characters. There will be the opportunity for those attending to see if our computer vision system can detect their smiles, watch the most recent videos of our robots in action and talk to us about the project.”

If we can understand how we break up facial movement into elementary facial actions and how actions vary between people, this will help computer scientists to both analyse facial movement and build realistic motion into avatars, making avatars more acceptable to people as channels of communication.

Professor McOwan adds: “Robots are going to increasingly form part of our daily lives – for instance robotic aids used in hospitals or much later down the road sophisticated machines that we will have working in our homes. Our research aims to develop software, based on biology, that will allow robots to interact with humans in the most natural way possible - understanding the things we take for granted like personal space or reacting to an overt emotion such as happiness.”

Co researcher Professor Alan Johnston, from the UCL Division of Psychology and Language Sciences added: “A picture of a face is just a frozen sample drawn from a highly dynamic sequence of movements. Facial motion transfer onto other faces or average avatars provides an extremely important tool for studying dynamic face perception in humans as it allows experimenters to study facial motion in isolation from the form of the face.”

Co researcher Professor Cecilia Heyes, from All Souls College, University of Oxford, points out: “This technology has all kinds of great spin-offs. We’re using it to find out how people imitate facial expressions, which is very important for rapport and cooperation, and why people are better at recognizing their own facial movements than those of their friends – even though they see their friends faces much more often than their own.”

The Exhibition is located in the Royal Society, 6-9 Carlton House Terrace, London, SW1Y 5AG and takes place from Tuesday 5 July to Sunday 10 July 2011.