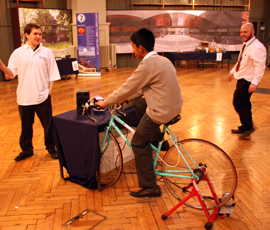 The Year 9 and 10 pupils enjoyed a range of hands-on experiments, quizzes and talks from the University’s science experts and had the opportunity to use equipment that they do not have access to in schools.

A circus of eight activities on the theme of energy included thermal imaging cameras, a hydroelectric pump, wave tanks, and a ‘disco’ of flashing lights and music that came to life when students generated energy by pedalling a static bicycle.

The exhibits intended to show how new and developing technologies could be used in the ‘real world’, and encourage students to take an interest in careers in the energy industry.

The half-day sessions at the University ran between the 1 and 3 of November and will be followed by workshops at the schools, with activities chosen by teachers to tie-in with the school curriculum.

The event will introduce some of the physics topics which are not studied at GCSE, such as particle and nuclear physics. It will teach and enhance the skills needed to succeed at A-level and encourage students to consider studying a degree in the subject.

SEPnet is a consortium of physics departments in seven universities working together to deliver excellence in physics teaching and research.

In partnership with local schools, it aims to increase the popularity of GCSE, A-Level and university physics through free-of-charge activities that demonstrate the beauty and relevance of science.