Defining the future of robots in industry and research

LIREC (LIving with Robots and IntEractive Companions), an EU-funded project exploring how we might live with robot companions, will be hosting an event exploring the definition of robots in the world of industry and research on Thursday 1 December 2011. 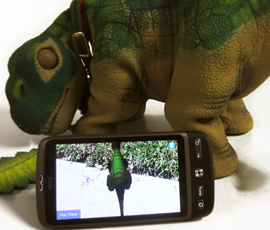 Robot Futures: Beyond the Valley, will start with a private view and showcase of four LIREC robots at the Science Museum (part of the upcoming RobotvilleEU Exhibition) followed by a panel discussion at the Royal Geographical Society.

LIREC is a collaboration of 10 European partners specialized in psychology, ethology, human-computer interaction, human-robot interaction, robotics and graphical characters. It aims to create a new generation of interactive, emotionally intelligent, companion technology, that is capable of long-term engagement with humans – in both a virtual (graphical) world, and in the real-world (as robots).

The project is one of the first in the world to examine how we react to a familiar companion entity when it swaps from a robot body into a virtual form, for example on a computer screen. The robots on display will include Queen Mary’s state of the art ‘emotion recognition system’ which aims to detect your mood; Pleo, a dinosaur play companion that transfers to your mobile phone so you can play with him everywhere; Charly, a robot used for investigating peoples preferences regarding robot appearance and social behaviours for domestic and service robots; and Flash, a robot with different heads that  attempt to simulate human emotions in robots.

Professor Peter McOwan from Queen Mary’s Faculty of Science and Engineering leads the LIREC project. He explained: “This event hopes to explore what defines a robot: is it a piece of hardware, is it software, is it supposed to look like us, how do we expect them to behave? And for me, perhaps most importantly, where are the lines in human life that robots shouldn't cross?

Robot Futures: Beyond the Valley is on Thursday 1 December from 4pm to 8.30pm. More information is available at: http://robotfutures-estw.eventbrite.com/