Human cultural change - changes in ideas, beliefs, words, customs and other traits that we learn from other people - shares fundamental features with how Charles Darwin argued that species change over time, according to a new book out this month by Queen Mary psychologist Dr Alex Mesoudi. 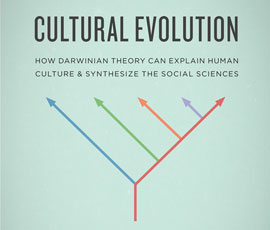 ‘Cultural Evolution: How Darwinian Theory Can Explain Human Culture and Synthesize the Social Sciences’ (University of Chicago Press) explores how human culture is itself an evolutionary process that exhibits the key Darwinian mechanisms of variation, competition, and inheritance.

Covering a wide range of topics, including popular fads and fashions, language diversification, technological change, the spread of religion, and herd behaviour in markets, this cross-disciplinary volume focuses on the ways in which cultural phenomena can be studied scientifically - from theoretical modelling to lab experiments, archaeological fieldwork to ethnographic studies - and shows how apparently disparate methods can complement one another to the mutual benefit of the various social science disciplines, including anthropology, archaeology, psychology, sociology, economics, linguistics and history.

Dr Mesoudi explains: “Charles Darwin changed the course of scientific thinking by showing how a remarkably simple process - evolution by natural selection - can account for the stunning diversity and complexity of life on earth. It’s less well known that he almost immediately applied his theory of evolution to human culture, arguing for example that language and technology evolve in a similar way to biological species. In my book I review a growing body of research that has pursued Darwin’s analogy, and shown how evolutionary methods can be used to explain various cultural phenomena in a rigorous and scientific manner.”

Professor Richard R Nelson, an evolutionary economist from Columbia University, commented: “While much of modern behavioural and social science treats individuals as autonomous agents, it is absolutely clear that the way we think and act is enormously influenced by the culture in which we live. It also is clear that the major elements of modern culture—science, technology, law, music, and religion—have evolved over time in a quite concrete sense of the term. Dr Mesoudi makes these arguments very well and his book is a very good read.”

Dr Alex Mesoudi is Lecturer in psychology in the Biological and Experimental Psychology Group at Queen Mary, University of London. He uses lab experiments and theoretical models to explore how broad cultural patterns and trends can be explained in terms of individual behaviour and interactions, all within an evolutionary framework. He is the author or co-author of more than 30 articles in leading journals across the fields of psychology and anthropology.