One of the leading publication venues in computer science has given Queen Mary, University of London’s Professor of Computer Science, Dr Peter O’Hearn, a retrospective award for the Most Influential Paper of 2001. 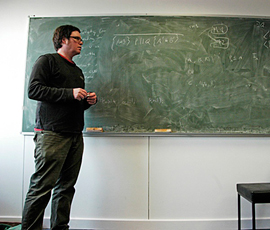 Dr O’Hearn, in conjunction with co-author Samin Ishtiaq, won £1000 for their 2001 paper titled BI as an Assertion Language for Mutable Data Structures at the Principles of Programming Languages (POPL) symposium*.

Dr O’Hearn said he was “delighted to receive the award”.

“POPL is the place where scientists in my research area go to expose their best ideas and to hear all the latest exciting developments. So to get this recognition from POPL some years after the work was first presented is a particular honour.

“I would like to acknowledge the previous work of two colleagues, David Pym and John Reynolds, which was essential to the research in our 2001 paper and also the grant from the Engineering and Physical Sciences Research Council which made it possible. EPSRC had the courage to fund this research and the results paid off.”

BI as an Assertion Language for Mutable Data Structures talks about mathematical techniques for ensuring that programs do not misuse computer memory, a frequent source of crashes, freezes and other computer errors. The paper’s key findings came about by linking an abstract mathematical theory called bunched logic, developed by Dr O’Hearn and Professor David Pym in the 1990s, to practical concrete problems in computer programming.

Co-author on the award paper, Dr Ishtiaq has continued his research in this area and has just released a software tool, SLAyer, at Microsoft Research Cambridge, which is based on theoretical work arising from the paper.

“It’s a great honour to receive this Award from the POPL community, and I am really grateful to Peter for all that I’ve learned from him,” said Dr Ishtiaq

Dr Ishtiaq was a research assistant of O’Hearn in 2001 and also received his PhD at Queen Mary, University of London.

*The annual POPL symposium is a forum for the discussion of all aspects of programming languages and systems, with emphasis on how principles underpin practice. The 2011 conference was held from 26-28 January in Austin, Texas.