A step closer to solving one of the biggest mysteries in fundamental physics?

Scientists from Queen Mary, University of London are attempting to solve one of the biggest mysteries in fundamental physics, through their work on the international T2K neutrino experiment in Japan. 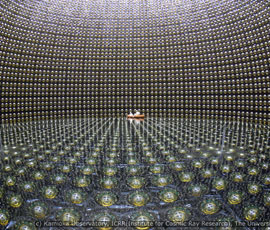 Inside the detector vessel at SuperKamiokande (University of Tokyo)

The latest intriguing results indicate a new property of the enigmatic particles known as neutrinos, and are an important step in discovering where all the matter in the universe came from.

Dr Francesca Di Lodovico, who heads the Queen Mary neutrino group and leads our T2K team, explains: “These results show that neutrinos can oscillate in every way possible. This could play a crucial role in explaining why there is more matter than anti-matter in the universe - something which could not happen within the known laws of physics.

“This is exciting news, and rewards all our efforts in recent years. We are all eagerly waiting to observe more data soon!”

Queen Mary’s T2K group in the School of Physics has ten members of staff, and was among the pioneering institutions in the UK that joined T2K in 2004. The group has contributed to all aspects of the experiment, from the design phase to construction of the electromagnetic calorimeter, and now the analysis of the data.

The Science and Technology Facilities Council is the UK sponsor of particle physics and supports the UK universities involved in the T2K experiment.