Research into how many Olympic jobs are going to East Enders is being carried out by students at Queen Mary, University of London. 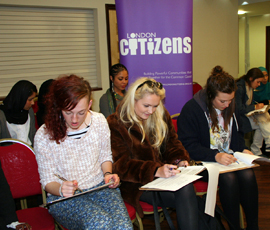 Recent reports suggest that local people are being by-passed in the queue for jobs, despite an agreement that they would be prioritised. In a 2004 agreement between community pressure group London Citizens and the London 2012 bid team (LOCOG), 30 per cent of jobs were to be set aside for people from the five Olympic boroughs.

All of those jobs were guaranteed to be paid at or above the ‘living wage’ of £8.30 per hour, which is the recognised rate to live comfortably in the capital.

The School of Geography is examining the ways job fairs have helped east Londoners secure some of the 40,000 ‘living wage’ jobs made available for the duration of the Games.

In her second year, Molly Wootten is one of 75 geography students working with Professor Jane Wills to collect data on the experiences of Olympic borough residents applying for six-week jobs.

“All the field work we have done has been very insightful into other people’s lives and struggles in today’s stagnant job market and economy,” says Molly.

“We have found that there is a wide variety of applicants coming forward, spanning all ages, employment history, ethnicity and gender. The process and work we’ve been doing has inspired me to become involved in local level government or citizenship work”.

As part of the research, Queen Mary geography students have also helped to boost local job opportunities at the Olympics through their involvement in a recent recruitment event on the campus.

The event was held at the university for Tower Hamlets residents and students wanting to work with Olympic catering contractor, Arena Leisure.

Suitable candidates had been lined up to have interviews with the official contractors in order to secure jobs in food processing, cleaning and hospitality. It is hoped that more than 1,000 local people will get jobs through this route.

Three third year students; Bronwyn Eastaugh, Ankia Bahra and Jade Lee all played a part in vetting candidates for catering jobs with Arena, while other Queen Mary students were encouraged to apply for the temporary positions at the 2012 Games. The Geography students interviewed all 125 Tower Hamlets residents who had been selected for interviews with the contractor.

The research aims to understand how groups that empower communities, such as TELCO (which is a branch of London Citizens), can help the unemployed into work.

As part of their training in research skills, the students will determine the effectiveness of registration events and the subsequent recruitment activity of Olympics contractors and compare the process with other ways of looking for, and securing, employment.

London Citizens will be able to use the information to evaluate and publicise their projects to get people in to work.

There are also implications for government schemes to get people employed, on both a local level and in large-scale state-supported redevelopment projects such as the Olympics.

“We have done one-to-one interviews and questionnaires at each of the registration events,” said Geography student Olivia Murphy.

“For example, my group went to Monoux College, Walthamstow (an Olympic borough) to find out more about peoples experiences and whether a community network like London Citizens can be used to help local people get into work.”

“As the Olympics are being held in east London, I think it's absolutely necessary for local boroughs to have priority in employment at the Games. It’s our job at Queen Mary to conduct research on behalf of east London.”