Student satisfaction at Queen Mary rises to highest ever level

Student satisfaction at Queen Mary, University of London, is five percentage points above the national average, and best amongst the large London universities, according to a nationwide survey of final year students. 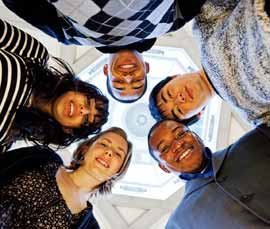 Student satisfaction at Queen Mary is higher than the national average

For students at Queen Mary this score has risen from 86 per cent in 2010 to 88 per cent in 2011 with the national average at 83 per cent. The University is now ranked 29th out of 184 higher education institutions for overall satisfaction, up 11 places from 2010.

Medicine at Queen Mary ranked eighth in the UK out of 32 medical schools, second in London to UCL, and ahead of Imperial, King’s, St George’s and Cambridge University.

“This year’s NSS results are Queen Mary’s best yet, with improvements not just in overall satisfaction, but also teaching, assessment and feedback, organisation and management, learning resources and personal development,” said Professor Susan Dilly, Vice-Principal for Teaching and Learning.

Biology has risen 17 places, whilst Economics and Medicine have both risen 15 places and are now ranked fifth nationally and eighth nationally respectively. Chemistry is up 14 places, now ranking tenth in the country.

The School of Engineering and Materials Science has seen particular improvement.  Materials is ranked top in its sector, with overall satisfaction at 93 per cent - 20 percentage points above the national average.

Aerospace Engineering is placed second in its field and Mechanical Engineering equal fifth.

Professor Dilly added: “While we congratulate all those who have worked towards these achievements we also recognise that there is always room for improvement as we continue to provide Queen Mary’s students with an excellent experience in all areas and in all subjects.”

French Studies scored 96 per cent in overall student satisfaction and is ranked equal 2/30 in its sector, up 25 places from 2010.

Economics is rated 93 per cent for student satisfaction and has risen 15 places to equal 5/57.

Medicine is rated 94 per cent for student satisfaction and has risen 15 places to equal 8/32.

Chemistry is rated 95 per cent for student satisfaction and has risen 14 places to equal 10/37.

Aerospace Engineering is rated 96 per cent for student satisfaction and has risen ten places to 2/19.

Over 260,000 final-year students took part in this year’s National Student Survey, which has been published annually since 2005 by the Higher Education Funding Council for England (HEFCE).