Screening adults for hypothyroidism could give 100,000 “a new lease of life”

A paper published in the latest issue of the Journal of Medical Screening concludes that screening women over the age of 50 and men over 65 for hypothyroidism could significantly improve the quality of life of 100,000 people in the UK. 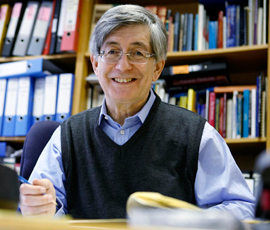 Researchers from the Wolfson Institute of Preventive Medicine, Barts and the London School of Medicine and Dentistry, Queen Mary, University of London, have shown that screening adults for hypothyroidism (underactive thyroid) is worthwhile and would improve people’s quality of life.

Hypothyroidism arises from an underactive thyroid. The disease is often overlooked because the typical symptoms – lethargy, tiredness, weight gain, forgetfulness – are non-specific and often considered a natural consequence of ageing. Blood levels of thyroid stimulating hormone (TSH) are raised when the thyroid is underactive so research was undertaken to establish whether this could be a useful screening test for undiagnosed hypothyroidism.

The results indicate that population screening for hypothyroidism would be worthwhile. Approximately 1% of people screened would have a better quality of life, representing over 100,000 people in Britain. Professor Sir Nicholas Wald, Director of the Wolfson Institute and one of the authors of the paper says: “It is rare to be able to find chronic diseases in adults that can be identified by screening, but this research shows that screening adults for hypothyroidism would be worthwhile. The UK National Screening Committee can now consider pilot screening programmes.”

He added “We need to focus preventive medicine more on improving quality of life whenever this is achievable at a reasonable cost. Hypothyroidism screening may not save lives, but for those affected it could provide a new lease of life.”

The research used a simple and powerful design, a randomized double blind cross-over trial. The TSH measurement was performed on people attending for a general health assessment (women aged 50-79 and men aged 65-79) at BUPA Wellness Centres. Over 4000 people's TSH measurements were taken and 8% of people had values high enough to justify an invitation into the trial. Of these, 110 met the inclusion criteria, 56 of whom completed the cross-over trial taking thyroxine (thyroid hormone) and a placebo in random order each for four months. The participants were asked whether they felt better on one treatment or the other, without knowing which was which. Among the 16 who had a raised TSH level a few weeks apart, the results were striking: 11 were better on thyroxine and none better on placebo, a statistically highly significant result (four felt no different). The main symptoms relieved were tiredness and loss of memory. There was no indication of harm.

An editorial in the same issue of the Journal by Dr James Haddow of the Savjani Institute for Health Research in Maine, USA, states that “This study provides evidence that even mild thyroid deficiency is associated with symptomatology and that treatment leads to improved wellbeing”.