Noam Chomsky, one of the world's foremost intellectuals and “father of modern linguistics” will be speaking at Queen Mary, University of London on 9 October, 2011. 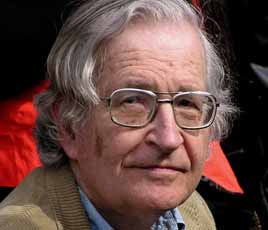 Chomsky will be interviewed by Professor David Adger, Head of the Department of Linguistics at Queen Mary.

The hour-long discussion will explore how current theories on language inform the study of the human mind, its biological and psychological processes, and how they influence cognitive science more broadly.

A professor of linguistics at the Massachusetts Institute of Technology (MIT) for over 50 years, Chomsky’s radical views have found him global recognition and revolutionised linguistics.

Considered the world's most cited living author, Chomsky has also made fundamental contributions to mathematics, philosophy and cognitive science. He is a fierce critic of US foreign policy and the perils of corporate power for democracy.

“Chomsky renewed linguistics as a science of the mind and as a means of understanding human nature,” explains Professor Adger. “In particular, he identified universal patterns in language that have their source in our biological make-up, part of the hard-wiring of our brains.”

Chomsky’s recent work advances the idea that mathematical patterns underlying physical and computational structures can, says Professor Adger, “shed light on the nature of human language, something which has, until now, often been thought of as a bit of an evolutionary mess”.

This approach is a focus of some of the work in the Department of Linguistics at Queen Mary, which is consistently ranked within the top three in the UK for teaching and research.

“This event is a fantastic chance to engage with the foremost thinker in the world and for our students it's probably the first chance they'll have had to hear Chomsky talk live about these topics and to put questions to him about what issues are important in their own work,” says Professor Adger.

The event is now SOLD OUT. A limited number of places are still available to view a live TV feed of the discussion in a separate room. Visit http://www.eventbrite.com/event/2303995312 to book