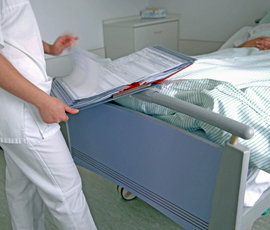 The research found a direct correlation between the reduction in mental illness bed provision, which has been part of the policy to increase community alternatives to hospitalisation, and growing rates of patients being admitted to psychiatric facilities involuntarily.

The closure of mental illness beds in high-income countries including England (along with changes to legislations such as the introduction of the Mental Health Act 1983) has been part of ongoing efforts to deinstitutionalise the care of the mentally ill in recent years.

However, in many of these countries, rates of involuntary admission into psychiatric facilities have been rising despite the introduction of various community-based services such as community mental health teams, assertive outreach, and crisis resolution home treatment.

The increase in the use of compulsory detention is unpopular with both patients and health care professionals and is generally seen as a source of concern to service commissioners and service providers due to the high costs associated with in-patient care.

The research team, which included Professor Kamaldeep Bhui of  the Centre for Psychiatry at the Wolfson Institute of Preventive Medicine, Barts and The London School of Medicine & Dentistry,   set out to explore why the rates of involuntary admissions have been rising over the past 21 years, and to test the hypothesis that there is a direct association with the reduction in mental illness bed provision in the NHS in England.

They analysed publically available data from the NHS Information Centre and Department of Health hospital activity statistics on NHS mental illness bed provision and involuntary admission rates for each year between 1988 and 2008.

The strongest association between these variables was observed when a time delay of one year was applied, with bed reductions preceding increases in involuntary admissions.  Their results indicate that, on average, for every two beds that closed there was one additional involuntary admission in the following year.

The researchers conclude: “We emphasise that this paper does not suggest that bed closures are intrinsically inappropriate. This strategy may well be a reasonable course of action; but the bed mix needs to be examined more closely and the rate and consequences of bed closures may need to be considered more carefully.

“Ultimately this study provides important evidence for the need to anticipate the effects of bed closures.”