An image of a ‘bionic bone’ taken by a scientist at Queen Mary, University of London, has been chosen for a Royal Photographic Society exhibition celebrating the role of photography in science and research. 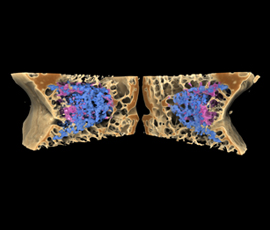 The image shows the healing of bone within a ceramic sponge. The sponge was implanted into a defect generated in the bone to test whether or not the sponge stimulated bone regeneration.

It was created in 2008 by Dr Karin Hing, a senior lecturer at the School of Engineering and Materials Science using an X-ray scanner built by Dr Graham Davis at the London School of Medicine and Dentistry.

The image enabled medical researchers to determine in three dimensions the degree to which the bone had grown into the ceramic sponge, how it had been incorporated into the natural structure of the surrounding tissue and whether it had been remodelled and replaced by new bone tissue.

This research led to the development of a new form of bone graft substitute that has now been implanted in over 120,000 patients world wide.

Dr Graham’s MuCat X-ray Micro-Tomography scanner works in a similar way to medical CT scanners, which detect x-rays after they have passed through the body and measure their strength or intensity. Computers process the results of a CT scan and display them as either a 2D or 3D picture on a monitor showing tissue, such as bone, which hinders the X-rays passage.

Unlike medical CT scanners the MuCat scanner is a research tool with higher spatial resolution (equivalent to having a digital camera with more megapixels) and greater sensitivity to differences in the intensity of x-ray beams, which enables the viewer to distinguish between old bone, new bone and ceramic sponge. Drishti, the software that enables visualisation of tomography data, was used for the final image processing.

Entries for the International Images for Science Exhibition were submitted from around the world, and Dr Hing’s is one of just fifty that has been selected.

Photography plays a huge role in all aspects of science, from assessment, evaluation and diagnosis, to measurements, publications and research documentation. It is used across most disciplines, including medicine, forensic sciences, engineering, archaeology, oceanography, natural history, astronomy, aviation, microscopy and endoscopy and many more.

Afzal Ansary, curator of the exhibition, said: “No number of words can express or indicate the information that a photograph can. Therefore, scientists have always needed to communicate their discoveries by pictorial documentation in the form of photographs. In fact, the application of photography to science is almost as old as photography itself.”