A wearable instrument that uses body movement to create music has been invented by a post-doctoral researcher and an artist at Queen Mary, University of London. The work has proved a hit with critics who described a recent performance at the National Portrait Gallery as “curious, interactively noisy and compelling”. 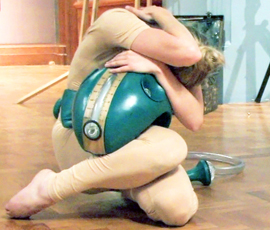 Adam Stark, who is based at Queen Mary’s Live Music Lab in the Centre for Digital Music, and artist-in-residence Di Mainstone designed the instrument that featured in an installation inspired by the life of engineer Isambard Kingdom Brunel at the National Portrait Gallery’s ReAnimate show earlier this month.

At the event on August 5, leotard-clad dancer Hollie Miller wore the devices around her waist and neck and used silver balls, tubes and other hand-held instruments to craft a musical performance with her body movement. The piece was titled The Atmospheric Railway and was inspired by and representative of Brunel’s life and career.

Artists had been invited by the National Portrait Gallery and the show’s curator Martyn Ware, founding member of The Human League and now a music producer, to create installations based on the paintings, photographs and sculptures housed at the Gallery.

As Miller danced, dropping silver balls into the tubes around her neck and waist throughout the performance, the sounds caused by her movement were picked up by microphones surrounding the performance space in the Gallery’s hallways. With the performance rising to a climax, additional instruments magnified and distorted the sounds created by Miller’s movement. The pinging balls, and those spilled onto the floor, represented the passing years of Brunel’s life, from his success as a great British engineer to the failure of his rail system powered by forced air - The Atmospheric Railway.

When picked up by microphones, the chiming sound of the balls falling into the tubes were played back in 10-second loops to create the chugging noise of the railways that made Brunel famous.  The loops were recorded using technology that detects events in sound, developed at the Live Music Lab, before being passed through a sequence of effects.

Using wireless sensors built into the instrument, the nature of Miller’s movement changed the effects the sounds were passed through. The result was an installation described as “exactly the right thing to stumble upon” in the Gallery’s corridors by UK professional arts and culture website The Arts Desk.

Commenting on the installation, Stark, who runs the Live Music Lab, said: “This isn't the end for Atmospheric Railway. It will soon be returning for several more public performances, perhaps adding an interactive aspect for the audience too.”

Mainstone is currently in the process of developing a new wearable musical instrument exploring the properties of water, to be shown at Dublin Science Gallery from 20th October 2011 - 20th January 2012.