Undergraduate applications to Queen Mary, University of London, are up almost four per cent from this time last year, bucking the trend of falling numbers across the UK. 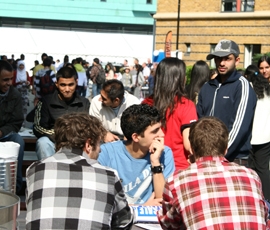 Applications to study medicine and dentistry across the country have fallen by 3.8 per cent, but Queen Mary has seen a record number of prospective students applying for a place. Before the October 15 deadline, applications to Barts and The London School of Medicine and Dentistry at Queen Mary were up 15 per cent from last year, with medicine in particular seeing a huge rise; 27 per cent more students applied for the five year degree this year.

“Our current students seem ever more confident about recommending the School,” said Professor Anthony Warrens, Dean for Education.  “After telling us that the School was ‘the most friendly’ they had chosen from, they have helped us to understand what changes we needed to make to keep our curriculum at the cutting edge, too.  They are making a big investment in their years here and they can see how committed we all are to making sure that they get what they need from university life.  They are the ones I believe we have to thank for our great popularity this year”

Queen Mary’s internationally recognised School of Medicine and Dentistry was ranked second for dentistry and fourth for medicine in the UK in the most recent Research Assessment exercise. It was placed first in London, ahead of University College, Imperial College and King’s College and appeared sixth in the UK for Medicine and seventh for Dentistry in the Complete University Guide 2012.

Marlon Gomes, Head of Admissions, commented: “Queen Mary’s School of Medicine and Dentistry should be extremely proud of bucking the trend and attracting more students than ever, despite the change in tuition fees for 2012 entry. The University scored a fantastic 88 per cent in this year’s National Student Survey and regularly appears in the UK top 20 in major league tables. Our teaching and research are world renowned and we also rank extremely highly on student employability and starting salaries. Future students have clearly taken notice.”

Applications for non-medical or dental programmes close on January 15 for 2012 entry.