Rabinder Singh QC will deliver the annual LexisNexis Butterworths Lecture on Law and Society at Queen Mary, University of London on 16 March 2011. 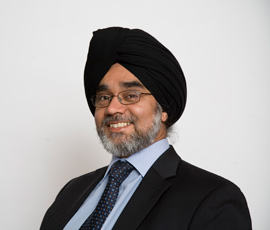 The lecture, entitled ‘The Changing Nature of the Judicial Process’ will examine what judges actually do in practice and how this has changed over the last 100 years.

A practicing barrister at Matrix Chambers in central London, well-known for his success in human rights cases, Rabinder will discuss the end of the role of the courts in developing criminal offences at common law and the increasing importance of international law in domestic courts in recent times.

He will also explore the changes in what is expected of first instance judges - who preside over the initial proceedings of a case at court – in relation to changes to sentencing by Parliament, the Sentencing Council, directions to the jury and training by the Judicial Studies Board.

“Much of the judicial function is not governed by rigid rules but lies in the realm of discretion and evaluation. Most importantly, judges are often required by the law to act in the public interest, in both civil and criminal law,” he suggests.

Rabinder was named Barrister of the Year by the Lawyer Magazine in 2001 and was awarded Silk in 2002. He was appointed a Deputy High Court Judge in 2003 and in 2004 he became a Recorder of the Crown Court.

One of the youngest QCs and judges at the time of his appointment, Rabinder has acted for the government and organisations such as the Campaign for Nuclear Disarmament (CND) and Liberty in many high-profile human rights cases.

He gained widespread attention in the 2004 Belmarsh case, for example, successfully representing Liberty in the House of Lords against the indefinite detention without charge or trial of non-nationals suspected of terrorist activities.

In 2010, Rabinder was named Human Rights and Public Law Silk of the Year by Chambers & Partners. His list of publications includes The Future of Human Rights in the United Kingdom and Human Rights: Judicial Enforcement in the UK, which he co-authored.

The Butterworths Lecture is a particular highlight in the legal calendar at Queen Mary, with previous high profile speakers such as Shami Chakrabarti CBE, the director of human rights group Liberty; Sir Kenneth McDonald, former was Director of Public Prosecutions of England and Wales and The Honourable Mrs Justice Dobbs DBE, the first person from an ethnic minority become a judge in the High Court of Justice of England and Wales.