A team of public health specialists at Queen Mary, University of London is embarking on a major five-year study, investigating Olympic-led health and social regeneration in east London. 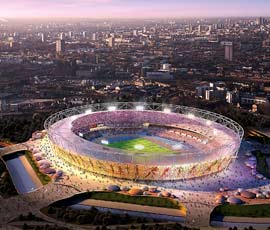 Dr Steve Cummins, a Senior Lecturer in the School of Geography whose work focuses on the effect of the built environment on health, will lead the project thanks to a significant research grant from the National Institute for Health Research secured in April 2011.

“The original 2012 Olympic bid was secured partly because it was recognised that the Games could be a catalyst for vital health, social and economic regeneration of neighbourhoods in one of London’s most deprived areas," explains Dr Cummins.

“The Government anticipated that the Games would lead to new jobs, business and volunteering opportunities, and more affordable housing for Londoners.

“In addition to the world-class Olympic sports facilities, there was significant commitment to creating new green and open spaces, public transport routes and new cycle and pedestrian walkways to inspire local communities to take part in more physical activity.

“Our project will examine whether such Olympic legacies and aspirations will actually transform the health and wellbeing of residents of east London,” adds Dr Cummins, who has also secured a £550,000 NIHR Senior Fellowship, the only UK academic to receive the award this year.

They will interview over 1800 local families from across Tower Hamlets, Newham and Barking and Dagenham during the course of the study.