Lord Mandelson is to unveil a statue of former Prime Minister Clement Attlee in its new location at Queen Mary, University of London on Monday 4 April 2011. 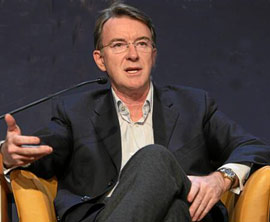 A lecture to celebrate “The incomparable Clem” will also take place, delivered by Lord Hennessy, Attlee Professor of Contemporary History at the College.

“Queen Mary’s association with Clement Attlee stems back to 1945 when he attended the election count in the Great Hall of the People’s Palace – now part of the College,” explains Professor Hennessy.

“On that night he learned that his party had won sufficient seats in parliament to form the first government after the end of World War II.”

The statue, created by artist Frank Forster, was originally unveiled in Limehouse in 1988 to commemorate Attlee’s considerable achievements as the area’s former MP, leader of the Labour Party and post-war Prime Minister.

The relocation and repair of the statue in 2010 was funded by Queen Mary and facilitated by the London Borough of Tower Hamlets from which it is now on long term loan.

“During Attlee’s time at the helm, between 1945 and 1951, the British government took major steps to nationalise major industries and public utilities as well as create the National Health Service. He is often remembered as one of Britain’s most popular leaders,” notes Professor Hennessy.

Lord Mandelson was invited to reveal the statue as his grandfather Herbert Morrison was Deputy Prime Minister and Leader of the House of Commons in Attlee’s Cabinet.

Much like Attlee, Peter Mandelson is a lifelong British Labour Party politician who served in a number of Cabinet positions under both Tony Blair and Gordon Brown. He was a key architect in the rebranding of the Labour Party as "New Labour" and its subsequent landslide victory in the 1997 general election.

Made a life peer by the Queen, he took his seat in the House of Lords in 2008. More recently Lord Mandelson became chairman of consultancy firm Global Counsel LLP.

Photos will be available on request