London’s Latin American workers are being illegally paid below the minimum wage at a rate 10 times higher than the UK average, suggests a new report produced by Queen Mary, University of London. 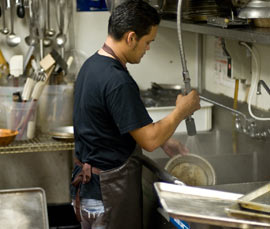 No Longer Invisible is the most comprehensive research to date of this largely overlooked migrant community and was commissioned by charities Trust for London and the Latin American Women’s Rights Service.

The report establishes the first robust estimate of the size of the community and explores a number of key economic and social features of the Latin American community in London.

The size of the Latin American community in London is estimated to be 113,500 and it has grown nearly four-fold since the 2001 census (the UK figure is estimated to be 186,500). The largest national group are Brazilians followed by Colombians. There are also large numbers of Ecuadorians, Bolivians and Peruvians.

The research primarily draws its findings from a large quantitative survey, of over 1,000 Latin Americans living in London. The survey was directed by Dr Cathy McIlwaine, of the School of Geography at Queen Mary, and builds on research she has worked on in this area since 2004, as well as previous research in Latin America itself.

“Although Latin Americans are found in all walks of life, the research has highlighted that they are over-represented in certain sectors of the labour market such as in elementary jobs in cleaning and catering,” Dr McIlwaine explained.  “They are also excluded from many basic services in the city. This research sheds light on the lives and livelihoods of Latin Americans and the important ways in which they help the city function economically, as well as add to its rich cultural diversity, despite being largely invisible until recently.”

Tania Bronstein, Chair of Latin American Women’s Rights Service said: “For too long the Latin American community has been ignored. The population estimate shows we are comparable in size to the capital’s Polish, Bangladeshi and Pakistani communities. It is important we are counted, especially by Government agencies, so that our contribution and needs are not ignored.

It is only when we are visible that issues uncovered by this research, such as the low rate of registrations with GPs and dentists by Latin Americans, are identified and can be addressed,” she added.

“This research shows the scale of the challenges facing Latin Americans in London,” said Bharat Mehta, Chief Executive of Trust for London. “Although most of the capital’s Latin American community are working hard, many are facing high levels of exploitation and abuse and as a result experiencing significant poverty and hardship. This should be of concern to all of us and there is a need for this to be addressed.

We are particularly concerned that such a large number of Latin American workers are being illegally paid below the National Minimum Wage. At ten times the UK rate there is an urgent need for the Government to enforce the law.”

The report was launched at City Hall on 19 May. The event will be opened by the Deputy Mayor of London, Richard Barnes, who chairs London’s Strategic Migration Partnership.