Jeremy Bowen, BBC Middle East Editor - and the first British journalist to interview Muammar Gaddafi since the start of the Libyan uprising - is to speak at Queen Mary, University of London on 4 May. 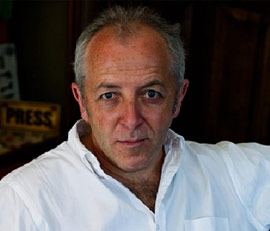 Entitled ‘New Crusaders?’ The Modern Middle East, his lecture is the first in a series to mark the launch of the College's Masters in Islam and the West.

This ground-breaking MA programme, which started in autumn 2010, explores one of the fundamental issues of modern times – the relationship between Islam and the western world.

Charting a 1,400-year period, from the birth of the Muslim faith in the seventh century to the present day, the course looks beyond the spheres of politics, warfare and religion.

“The course also aims to reveal the positive interactions between these two overlapping worlds,” explains Dr Tom Asbridge, Programme Director, from the School of History.

“Shared knowledge in science, maths and astronomy, for example, lead us to question simplistic assumptions about an ‘inevitable clash’ of Muslim and Western civilisations.

“To explore these cultural, intellectual and economic connections, students are taught by leading experts from across the Faculty of Humanities and Social Sciences in specialist fields such as migration, literature, the modern Middle East, the crusades, medieval Islam, Sharia Law and Islamic terrorism,” says Dr Asbridge, who is also author of The Crusades: The War for the Holy Land (2010).

“We are honoured to have Jeremy Bowen deliver the first of our annual lectures,” Tom adds. “Jeremy very much has his finger on the pulse of the Middle East and can offer a unique perspective through his well-honed journalistic expertise and background as a published author in the field.”

Jeremy Bowen joined the BBC in 1984 and has been a war correspondent for much of his career. He has reported from more than 70 different countries, predominantly in the Middle East and in the Balkans.

He became the BBC's first Middle East Editor in June 2005, to provide a broader perspective on wider issues in the region and to add context to the reporting of events on the ground.

As a veteran broadcast journalist, Bowen has won multiple awards including a Sony Gold award for News Story of the Year on the arrest of Saddam Hussein and an International Emmy for his BBC coverage of the 2006 Lebanon War.

For further information on the new MA in Islam and the West, visit: www.islamandthewest.qmul.ac.uk