The number of women under 30 diagnosed with cervical cancer will fall nearly two thirds by 2025, thanks to the HPV vaccine. 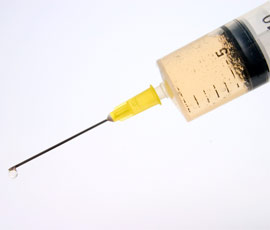 A study, published in the British Journal of Cancer today (Wednesday), predicted that the number of women in their twenties diagnosed with cervical cancer will drop by 63 per cent in the next fifteen years.

Girls aged 12 and 13 have been offered the HPV vaccine in the UK since 2008. It protects against two types of the virus – HPV 16 and HPV 18 – which cause around 70 per cent of cervical cancers.

The researchers also predicted 51 per cent fewer women will have CIN3 – severe cell changes that need treatment because they could lead to cervical cancer. And they say there will be 27 per cent fewer abnormal smear tests which are less severe than CIN3.

This group of women will be the first to benefit from the vaccine and they provide an early indication of benefits that will be seen as these girls age.

Cancer Research UK’s Professor Jack Cuzick, lead author from Queen Mary, University of London, said: “In women in their twenties alone, around 145 cases of cervical cancer will be prevented each year in the UK thanks to the HPV vaccine. And around 13,000 women each year will be spared from having an abnormal screening test result.

“Our predictions are really encouraging. If girls continue to take up the vaccine, thousands in the future could be prevented from developing cervical cancer and many more would avoid treatment to remove abnormal precancerous cells.

“This is the most realistic estimate of the impact the vaccination programme will have on the number of women who develop cervical cancer. It shows that the vaccine has great potential in preventing the disease in the near future, but also that it’ll take several decades before we see its full benefits.”

There are around 2,800 new cases of cervical cancer diagnosed in the UK each year, and around 225 of these are in women in their twenties.

Dr Lesley Walker, director of cancer information at Cancer Research UK, said: “This is really good news for girls who have had the vaccine and for those who will have it in the future. But it’s important to remember that the vaccine will not completely wipe out cervical cancer because it doesn’t protect against every type of high risk HPV.

“Now and for the foreseeable future, it’s vital that women go for cervical screening when they’re invited. Screening can prevent cervical cancer by detecting unusual changes in the cervix before cancer develops and it saves thousands of lives in the UK each year.

“Our message is to take up the opportunity to get vaccinated but it’s equally important to go for screening when you’re invited.”