A professor of hepatology at Queen Mary, University of London has joined other higher education institutions in calling on the Government to implement a hepatitis screening programme for people who come to the UK from countries at high-risk of the disease. 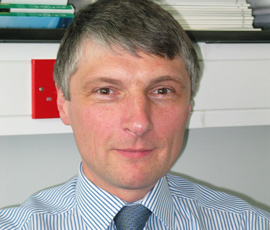 In a letter to the Times today (19 May), Professor Graham Foster, along with other hepatitis experts and interested parties, wrote: “More than half a million people in the UK are believed to be infected with hepatitis B or hepatitis C, and most of them remain unaware of it. There are often no symptoms and infections are diagnosed too late for treatments to be of much help.”

There are more than 500 million people infected with hepatitis worldwide, and a million deaths from the disease a year. A resolution at the 63rd World Health Assembly this week, co-sponsored by Brazil, Colombia and Indonesia, called for greater awareness, prevention, screening and treatment of viral hepatitis.

“Greater awareness is just as necessary in the UK, where there is a common misconception that viral hepatitis infects only those who are sexually promiscuous or who misuse drugs,” the letter said.

“More than a tenth of our population was born outside the UK and we need to take account of that. We call upon the Department of Health to implement a screening programme for people from high-risk countries to identify those who need treatment at a stage when it is still cost-effective.

“GPs can easily screen patients from high-risk areas with a simple blood test. Failure to act now will result in many avoidable deaths.”

In a paper published last year*, Professor Foster and colleagues conducted the first large-scale study to address the prevalence of viral hepatitis in people of south Asian ethnicity.

It suggested the high prevalence in certain groups, particularly those born in Pakistan, would lend support to efforts to identify and treat infected individuals before they develop significant disease.

Professor Foster said: “Our research demonstrates the need for increased efforts at hepatitis awareness across the UK and screening of hepatitis in high-risk communities.”

*Prevalence of chronic viral hepatitis in people of south Asian ethnicity living in England: the prevalence cannot necessarily be predicted from the prevalence in the country of origin, Journal of Viral Hepatitis, 2010, 17, 327-335.