Research by scientists at Queen Mary, University of London has found that a predicted rise in global temperature of 4°C by 2100 could lead to a 13% reduction in ecosystems' ability to absorb carbon dioxide (CO2) from the atmosphere. 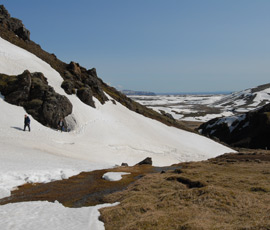 Writing in Philosophical Transactions of the Royal Society B, the scientists describe a new model to predict how the carbon storage capacity of ecosystems would respond to future global warming. They tested their predictions against data collected from experimental ponds which were warmed to simulate global warming, revealing a 13% reduction in the amount of CO2 absorbed by the warmed ecosystems.

Lead author of the Philosophical Transactions paper, Gabriel Yvon-Durocher from Queen Mary's School of Biological and Chemical Sciences said: "The beauty of this model is in its simplicity. We made our prediction based on just two parameters – the 'activation energies' for photosynthesis and respiration, and the increase in temperature which exactly predicted the changes observed in our experiment.”

The work is complemented by another paper published this month by Dr Guy Woodward and other Queen Mary colleagues in the journal Global Change Biology. This research compared animals living in 15 similar Icelandic streams, a rare long-term 'natural experiment' in which geothermal activity heats some streams up to 45°C. The unique situation meant researchers could study how temperature affects Arctic ecosystems, where climate change is predicted to cause a rise of around 7.5°C within the next century.

Dr Woodward says: "We found dramatic changes in the type and number of species in cold streams compared with the warmer ones. It was notable that fish and other larger predatory animals were absent from the coldest streams. We saw longer food-chains, with predators becoming bigger and more abundant as temperatures increased from 5°C to 25°C.  We also have more recent (as yet unpublished) data collected from the Icelandic streams by colleagues at the Macaulay Institute that show similar patterns to those seen in the experimental ponds: namely the warmer streams emitted far more CO2 than the cooler streams and acted as sources of carbon, rather than sinks."