One year in to a project to save one of the UK’s top sites for pondlife, amazing new species are being revealed for the first time.

Scientists from Queen Mary, University of London working with Dorset Wildlife Trust have discovered an astonishing variety of minute aquatic organisms, so small as to be invisible to the naked eye. 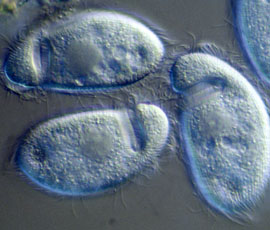 East Stoke Fen nature reserve is coming under the microscope of scientists from Queen Marys' School of Biological and Chemical Sciences, based at the Freshwater Biological Association's River Laboratory. They have already found over 30 species of invertebrates smaller than half a millimetre (so called meiofauna) and over 100 single-celled species (ciliates) in less than two months.

The reserve’s reed fen, on the floodplain of the River Frome near Wool, is a rare and declining habitat in Dorset. Now, with funding from the Esmée Fairbairn Foundation, the Wet Fens Project is being launched to study ‘cryptic biodiversity’ (biodiversity invisible to the naked eye) and raise awareness so that it can be protected in pond and fen management.

Dr Genoveva Esteban of Queen Mary’s School of Biological and Chemical Sciences, said: “Cryptic biodiversity helps natural ecosystems to bounce back in response to environmental change. The Wet Fens Project in partnership with Dorset Wildlife Trust and the Freshwater Biological Association is pioneer work in the UK, to link research with conservation practice with the aim of incorporating small organisms into wetland conservation management. Local biodiversity conservation will become all-embracing by covering the full range of aquatic organisms that contribute to the proper functioning of an ecosystem– not just those judged as ‘charismatic’.”

Dr Rachel Janes, Dorset Wildlife Trust’s Pond Project Co-ordinator, said: “It is very exciting to learn about these incredible animals on our reserve, thanks to the work of the scientific team. The Wet Fens Project will help to protect them for the future, alongside the more visible aquatic wildlife.”

The Wet Fens Project will be launched this month at a seminar to celebrate the first year of the 2-year Purbeck Important Ponds Project, which was launched in January 2009 by Dorset Wildlife Trust and funded by Biffaward, - a multi-million pound environment fund which utilises landfill tax credits donated by Biffa Waste Services, the Environment Agency and the Dorset AONB (Area of Outstanding Natural Beauty), to safeguard one of the UK’s foremost regions for pond biodiversity. Purbeck ponds are an aquatic hotspot for wildlife, including nearly all of the known British dragonfly species as well as the rare great crested newt.