Whales exhibit skin damage consistent with acute sunburn in humans, and it seems to be getting worse over time, reveals research published this week. 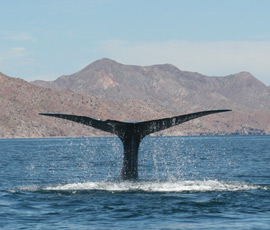 Scientists from Queen Mary, University of London, the Zoological Society of London (ZSL), and CICIMAR in Mexico, studied blue whales, fin whales and sperm whales in the Gulf of California to determine the effect of rising levels of ultraviolet radiation (UVR) on their health.

For a number of years scientists have observed blisters on the skin of whales. Now, using high-quality photos to give accurate counts of the blisters and analysing areas of damage in skin samples, this research published in Proceedings of the Royal Society B, has found that the three species of whale exhibit skin damage that is commonly associated with acute sunburn in humans.

Notably, the scientists also found that signs of sun damage were more severe in the paler-skinned blue whales, compared with the darker-skinned fin whales, and that in blue whales the symptoms of sunburn seem to be getting worse during the three years the study took place.

The UV index for the Gulf of California fluctuates between high and extremely high throughout the year. Lead author, Laura Martinez–Levasseur who works jointly at Queen Mary's School of Biological and Chemical Sciences and at ZSL, says, "Whales need to come to the surface to breathe air, to socialise and to feed their young, meaning that they are frequently exposed to the full force of the sun.

"The increase in skin damage seen in blue whales is a matter of concern, but at this stage it is not clear what is causing this increase. A likely candidate is rising UVR as a result of either ozone depletion, or a change in the level of cloud cover."

Co-author Professor Edel O'Toole, from the Blizard Institute of Cell and Molecular Science at Queen Mary, says, “As we would expect to see in humans, the whale species that spent more ‘time in the sun’ suffered greater sun damage.  We predict that whales will experience more severe sun damage if ultraviolet radiation continues to increase.”

The next phase of the research will look at the expression of genes involved in the production of skin pigmentation and DNA damage repair and try to gain a greater understanding of the consequences of sun damage in whales.

Lead author Dr Karina Acevedo-Whitehouse, from ZSL says, "We have shown that exposure to strong sun is damaging to whales’ skin.  We now need to understand the knock-on effects and whether whales are able to respond quickly to increasing radiation by enhancing their natural sun-protection mechanisms."