Dr Genoveva Esteban has been highly commended for her "infectious enthusiasm" and dedication in igniting the next generation's passion for science. 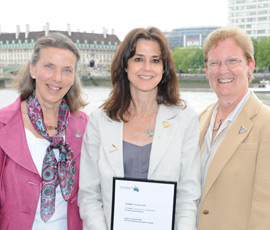 An aquatic biologist at Queen Mary, University of London, Dr Esteban attended a ceremony at the House of Lords, where she beat over 21,000 other applicants to be one of four runners-up in the national award for 'Most Dedicated STEM* Ambassador of the Year'.

In the last year alone, Dr Esteban has welcomed over 1,200 school children, students and their families during her free time and weekends, including many from the Thomas Hardye School in Dorchester who nominated her for the award.

Judith Wardlaw from the Science College at Thomas Hardye School, said; "Dr Esteban is an outstanding role model and the school is grateful to be one of the many beneficiaries of the high quality ambassadorial support she offers in bringing the hidden world of water biodiversity to life." The award was presented by veteran science writer and broadcaster Vivienne Parry.

This summer, sixth form student Lawrence Whatley will be working with Dr Esteban to produce a photographic guide to rare wetland and pond species, which will be used by other school students. This work is sponsored by the Nuffield Science Bursary project to celebrate the 2010 International Year of Biodiversity and will contribute to our knowledge of these near-invisible freshwater life-forms.

Yvonne Baker, STEMNET Chief Executive said: "Encouraging all young people to achieve their potential in science, maths, technology and engineering is key, both for their future and the future of the UK as a whole. Everyone has a role to play – schools, teachers, parents, volunteers and employers. The STEMNET Awards highlight some of the very best examples of people working together to enthuse young people with the excitement and possibilities to which these subjects, and associated careers, can lead."

Dr Esteban is also a prolific scientist, based at the School of Biological and Chemical Sciences' River Laboratory in East Stoke, which is owned by the Freshwater Biological Association. In addition to this and her voluntary work with the Science College Management Group in Dorset, Dr Esteban has contributed to many activities including Science Fun Days, pond-dipping challenges for school students, sixth form Spanish classes about single-celled organisms called protists, and curriculum support to freshwater biology school students at the River Laboratory.