Pulling power points the way to the World’s strongest insect 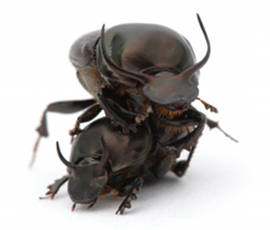 In an experiment to find out why animals vary so much in strength and endurance, Dr Rob Knell from Queen Mary, University of London and Professor Leigh Simmons from the University of Western Australia found the strongest beetle could pull an astonishing 1,141 times its own body weight - the equivalent of a 70kg person lifting 80 tonnes (the same as six full double-decker buses).

Writing in the journal Proceedings of the Royal Society B, the scientists also found these insect athletes need to pay just as much attention to their diet as human athletes. Even the strongest beetles were reduced to feeble weaklings when put on a poor diet for a few days.

"Insects are well known for being able to perform amazing feats of strength," explained Dr Knell from Queen Mary's School of Biological and Chemical Sciences, "and it's all on account of their curious sex lives. Female beetles of this species dig tunnels under a dung pat, where males mate with them. If a male enters a tunnel that is already occupied by a rival, they fight by locking horns and try to push each other out.” Knell and Simmons tested the beetles’ ability to resist a rival by measuring how much weight was needed to pull him out of his hole.

"Interestingly, some male dung beetles don’t fight over females," said Dr Knell. "They are smaller, weaker and don’t have horns like the larger males. Even when we fed them up they didn't grow stronger, so we know it's not because they have a poorer diet.

"They did, however, develop substantially bigger testicles for their body size. This suggests they sneak behind the back of the other male, waiting until he's looking the other way for a chance to mate with the female. Instead of growing super strength to fight for a female, they grow lots more sperm to increase their chances of fertilising her eggs and fathering the next generation."