Online guitar tutorial to set your performance on fire

Budding guitar heroes can get a helping hand from hot new online tutorials created by audio engineers at Queen Mary, University of London. 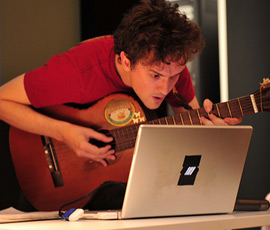 Mathieu Barthet from Queen Mary's Centre for Digital Music was part of the design team. He describes why they came up with the idea: "You fancy giving someone a surprise by playing a guitar song for them, but lack inspiration. Or you are really full of motivation but need a little help to know where to place your fingers to make sure you're on fire at the performance. We designed HOTTTABS to make it easy for you."

Mathieu explains: "The guitar tabs are clustered into three levels of difficulty based on an analysis of the chords needed to play them, and are shown in a 3D-tag-cloud style so you can visualise the main chords used and the available tabs at your preferred level of difficulty.

"The next stage is to develop this into a slick guitar tuition application for smartphones (such as iPhone or Android handsets) or computer tablets with multi-touch graphical user interface (such as an iPad) to enhance the usability and the interactivity. We are applying for 'Proof of Concept' funding from Queen Mary Innovation Ltd to develop this application and more cool features like a 'Now it's your turn' game in which the performance of the user would be recorded and compared against the original track. We also hope to develop a chord fingering dictionary, and a module that automatically finds and displays the correct lyrics for the song."

The Music Hack Day is a global challenge for developers, designers and hackers who have 24 hours to conceptualise, create and collaborate on the next generation of music applications. The modern music industry is changing thanks to the growing amount of digital art content and research innovations that offer new ways to manipulate and distribute this content. The Engineering and Physical Sciences Research Council (EPSRC) funded project OMRAS2 (Online Music Recognition and Searching 2) led by the Centre for Digital Music has been one of the pioneer in that respect launching new audio feature extraction systems (Vamp plugins) and semantic web technologies, opening the doors of creativity to music application developers such as the BBC Music Introducing website, a site set up to support new artists.