How do bumblebees get predators to buzz off?

Bumblebees' distinctive black and yellow "warning" colours may not be what protects them from flying predators researchers have found. 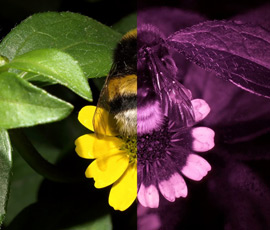 Toxic or venomous animals, like bumblebees, are often brightly coloured to tell would-be predators to keep away. However scientists at Queen Mary, University of London and Royal Holloway, University of London have found a bumblebee's defence could extend further than its distinctive colour pattern and may indeed be linked to their characteristic shape, flight pattern or buzzing sound.

"The first time a bird tries to eat a bumblebee can be a painful experience, not only for the bee but also for the bird, since the bee will use its sting to defend itself. It has been shown that birds are able to associate the characteristic colour patterns of the bees with this negative experience and avoid them in the future," explains Ralph Stelzer from Queen Mary's School of Biological and Chemical Sciences.

It is thought that this avoidance learning by predators is the reason why bumblebee species in the same location converge on a similar appearance. If a local predator has a negative encounter with one individual of any of these species carrying the same colour pattern, it is likely that it will avoid all these species in the future. The team tested this idea by comparing the loss rates of bumblebee populations with different colour patterns in different locations.

"We took bumblebee colonies of populations native to the UK, Germany and Sardinia and set them up side-by-side at field sites in these three countries. If the colour pattern is important, we would expect that the native species at each location would suffer lower loss rates since the local predators would have already learned to avoid them and therefore they should attack bees carrying a colour pattern they did not encounter before more often. But that is not what we found," says Mr Stelzer.

Predators didn't seem to target bees carrying the unfamiliar colour pattern more often than bees of local species. In contrast, in Sardinia the local species suffered the highest loss rate. This could mean that other factors than coloration are responsible for such losses.

Professor Lars Chittka, also from Queen Mary, adds, "At the moment it is unknown if birds will only avoid prey that are extremely similar to items that they have experienced as noxious, or whether they will form broad categories by shape, flight behaviour and sound, which would not give native bumblebees in any location a particular advantage."