A male deer's voice changes from one mating season to the next, reflecting his age and rank in society, according to new research from Queen Mary, University of London. 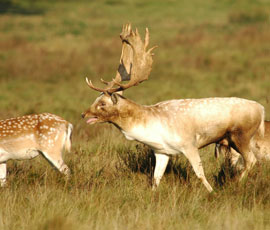 The study, published in BMC Biology, could lay waste to the idea that animals' calls have easily recognisable, enduring features, which allow them to identify one another year on year.

"During the mating season, male fallow deer emit loud 'groans' to tell nearby rivals and potential female mates about their physical capabilities," said Dr Alan McElligott, who led the research at Queen Mary's School of Biological and Chemical Sciences. "Our study shows that these calls are surprisingly honest, accurately reflecting the males' ability to fight off rivals and mate successfully with female deer."

As he matures, a male fallow deer can expect to rise up through the ranks of society, a change in status which is usually matched by his chance of mating with a female. Dr McElligott along with Elodie Briefer and colleague Elisabetta Vannoni from the University of Zurich studied the deer over four breeding seasons, recording the males' calls, their competition with one another, and noting which had most success with female deer.

Dr McElligott explained: "When we analysed the recorded groans, we found the calls of successful males had some striking similarities that we didn't find in the calls of less successful individuals. In biology, we call this 'truth in advertising', meaning that when a male deer groans like a mature, high ranking male who would be chosen as a mate by female deer, he isn't lying!

"However, these substantial changes from year to year mean a deer's call alone is an unreliable way to tell them apart from year to year; a problem rarely considered in other species. It would not surprise me if what we found in fallow deer is also discovered to be the case for many other animals, where males call a lot during the breeding season and live for several years. The research also highlights the importance of long-term behaviour studies."