The Grand Prize winners of the UK OurSpace competition were announced today on Futures Day at the Farnborough International Airshow 2010. 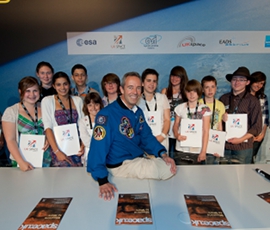 Earlier in the year British-born astronaut Richard Garriott, aka 'Lord British', announced the launch of OurSpace - a UK wide competition challenged students to "dream up their own amazing space adventure, a flight of imagination about their own space to reach prizes that are out of this world". Richard uploaded unique video footage from his 2008 International Space Station visit onto an interactive website which young people were free to use in their competition entries.

The finalists and Grand Prize winners were judged by a panel of space, education and media experts, along with Richard Garriott himself. Richard was so impressed that he is making some extra awards such as the Garriott Games award 2010 and the Garriott Research awards 2010.

The Grand prize for the 13+ age category, including a trip to Kennedy Space Centre in Florida and Johnson Space Centre in Texas, was awarded to Mala Mawkin, aged 15, of Haberdashers' Aske's School for Girls, Elstree

Special award certificates for entries were made to:

In December there will be a presentation ceremony in the House of Commons for the Grand winners and all finalists. You can see the winning entries along with Richard's videos on the OurSpace website.

OurSpace is led by Queen Mary, University of London and supported by the UK Space Agency. Professor Peter McOwan from Queen Mary, who leads the partnership, said: "Everyone who made it through to the Airshow event was a winner, but now we discover the Grand Prize winners. Richard's life as a games developer is legendary; OurSpace adds a new level to that legend. It's been an amazing journey for the team working on making these space adventures accessible, educational and fun."

He continued, "making the whole thing possible has been OurSpace partner GovEd’s competition website where Richard’s videos and a whole range of other media were hosted for contestants to use creatively."

Heather MacRae, Director of Venture Thinking said:  "We can see the inspiration that space provides to young people.  This competition encourages students to use science in a creative way.  We were amazed at their brilliant ideas."