Even bees need a break

Bees observe strict working hours even when the sun shines all day and night, according to new research from Queen Mary, University of London. 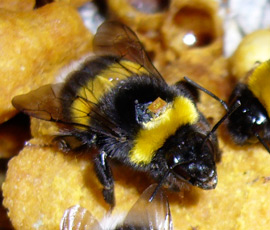 Researchers Ralph Stelzer and Professor Lars Chittka from Queen Mary's School of Biological and Chemical Sciences made the discovery while studying bumblebees (Bombus terrestris and Bombus pascuorum) in northern Finland, where the sun shines 24 hours a day  for several weeks during the summer.

According to Stelzer, "constant daylight would seem to provide a unique opportunity for bumblebees to forage during the entire 24-hour period, collecting as much flower nectar as possible and growing the size of their colony. However, we found that bees do not naturally take advantage of this opportunity, suggesting that there is some benefit to an 'overnight' break".

The team studied colonies of bees that are native to Finland, as well as bee colonies they imported into Finland for the purpose of the research. They tagged individual bees with radio-frequency (RFID) chips, and tracked their movements over several weeks. The results showed that both species worked a 'day shift', with peak in activity at about midday, then retired to their nests well before midnight.

Professor Chittka commented: "This is unusual. Other animals, such as reindeer and other social insects, live part of their lives in constant daylight and adapt their circadian rhythm (body clock) to those conditions. We expected bumblebees to do the same."

He and Stelzer speculate that the bees have a way of telling the time without relying on the obvious change between day and night. "Our discovery suggests the insects may be sensitive to light intensity and quality or subtle changes in temperature," said Chittka.

Speaking about the possible advantages gained by taking some time off, the researchers said, "Despite the light, temperatures do fall during the Arctic 'night', so it may be that the bees need to return to their nests in order to warm their brood. Also, it has been suggested that a period of sleep helps the bees to remember information gained during the day's foraging."