Researchers from Queen Mary, University of London (UK) and the University of Fribourg (Switzerland) have shown that a magnetically polarised current can be manipulated by electric fields. 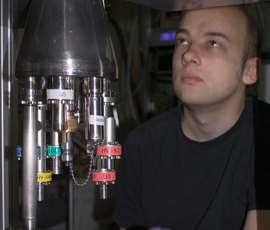 Published this week in the journal Nature Materials, this important discovery opens up the prospect of simultaneously processing and storing data on electrons held in the molecular structure of computer chips - combining computer memory and processing power on the same chip.

"This is especially exciting, as this discovery has been made with flexible organic semiconductors, which are set to be the new generation of displays for mobile devices, TVs and computer monitors, and could offer a step-change in power efficiency and reduced weight of these devices," said Dr Alan Drew, from Queen Mary's School of Physics, who led the research.

Dr Drew and his team have investigated how layers of Lithium Fluoride (LiF) - a material that has an intrinsic electric field - can modify the spin of electrons transported through these spin valves. He explains: "While in theory, devices that combine electron charge and spin are conceptually straightforward, this is the first time anybody has shown it is possible to proactively control spin with electric fields."

The experiments were performed at the Paul Scherrer Institute, the only institution worldwide; where this technique is available. The method employs the magnetic properties of muons - unstable subatomic particles. "In such an experiment the muons are shot into the material and when they decay, the decay products carry information about the magnetic processes inside the material," explains Professor Elvezio Morenzoni from PSI, where the technique has been developed.  "The unique thing about low energy muons is that they can be placed specifically in a particular layer of a multi-layer system. Thus using this method one can study the magnetism in any single layer separately."