Dolphin and bat DNA on the same wavelength

Scientists at Queen Mary, University of London have shown that the remarkable ability of echolocation is shared by bats and dolphins at a much deeper level than anyone previously realised – all the way down to the molecular level. 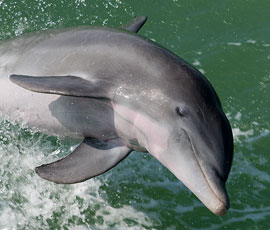 Writing in the journal Current Biology, they describe how dolphins and bats have both evolved the same specialised form of inner-ear hair cells that allow them to use sophisticated echolocation: detecting unseen obstacles or tracking down prey by making a high frequency noise and listening for the echo that bounces back.

"The natural world is full of examples of species that have evolved similar characteristics independently, such as the tusks of elephants and walruses," said Stephen Rossiter of Queen Mary's School of Biological and Chemical Sciences. "However, it is generally assumed that most of these so-called 'convergent traits' have arisen by different changes in the animal's DNA. Our study shows that this very complex ability - echolocation - has in fact evolved by identical genetic changes in bats and dolphins."

According to Rossiter, the discovery represents an “unprecedented” example of convergence between two very different animals, and suggests that further studies might unearth more genetic similarities between species than scientists would have suspected.

“We were surprised by the strength of the evidence for convergence between these two groups of mammals, and, related to this, by the sheer number of convergent changes in the DNA that we found," he said.

Rossiter and colleague James Cotton teamed up with Shuyi Zhang from East China Normal University to sequence the Prestin gene, which codes for a key protein found in the inner-ear hair cells of all mammals. The researchers discovered that this gene showed the very same mutations in bats and dolphins, and has adapted over time.

The prestin protein is known to drive the vibration of the hair cells in response to sound. It is possible that the genetic changes observed in bats and dolphins allow more rapid vibrations and, therefore, the higher frequency hearing that is needed for echolocation. Rossiter added; "the fact that it is the very same genetic changes that occurred twice in nature suggests that there might be a limited number of evolutionary routes to high frequency hearing in mammals".