Research from Queen Mary, University of London on the state of Britain’s streams is published in a new report today by the Countryside Survey partnership. 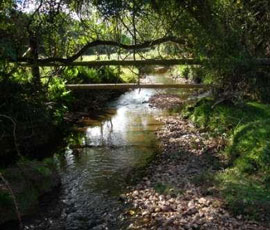 The report showed clear improvements in the quality of headwater streams - small streams usually less than 10km from their source - across the nation.

Dr John Murphy from Queen Mary's River Communities Group and co-author of the Headwater Streams report, said; "The condition of small streams in Britain is improving relative to past surveys in 1998 and 1990, which is very encouraging. Farmers and land managers are becoming more aware of how their actions can damage streams and their wild inhabitants, and are now taking more care to minimise these effects."

Countryside Survey is the biggest and most comprehensive survey of the British countryside and its natural resources and has taken place five times over the last thirty years. The Headwaters Streams Report follows the most recent survey, conducted in 2007, when a team of specially trained scientists surveyed almost 600 randomly selected one-kilometre square sites in England, Scotland and Wales.

Key findings described in the Headwater Streams report include:

This report and the Countryside Survey programme in general, provide important information needed by scientists and policy-makers to help decide how best to balance environmental concerns with the need for a sustainable and prosperous rural Britain.

Dr Murphy added; “The River Communities Group continues to address these important issues, we are currently collaborating on a number of other projects to provide evidence and guidance on how the rural landscape can be sustainably managed. We are involved in two Defra-funded projects investigating how best to protect headwater streams from the effects of diffuse pollution from agricultural sources. At the request of the Welsh Assembly Government, we have developed an extensive monitoring programme to provide robust evidence of whether streams and ponds are in better ecological condition when their catchments are within rather than outside of agri-environment scheme land. Such information is critical for the continued improvement of agri-environment scheme design and implementation."

Defra and the Natural Environment Research Council (NERC) commissioned the £10 million UK-wide Countryside Survey – the fifth since 1978 – on behalf of a partnership of governments, departments and agencies in the UK. The report was co-authored by scientists from the Centre for Ecology and Hydrology, Bournemouth University and Queen Mary, University of London.