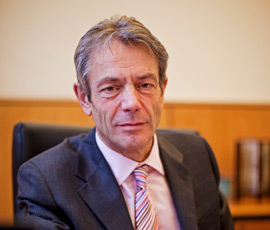 Speaking at a packed press conference in London last week, Professor Gaskell laid out the ways that investment in science and engineering brings benefits to the country, and why it deserves protection from public funding cuts.

Professor Gaskell spoke alongside distinguished panel members: Glynis Breakwell, Vice-Chancellor of the University of Bath; Malcolm Grant, President and Provost of UCL; Sir Andrew Haines, Director of the London School of Hygiene and Tropical Medicine; Rick Trainor, Principal of King’s College London; and President of the Royal Society, Lord Rees. The press conference was organised by the Campaign for Science and Engineering (CaSE) and the Science Media Centre.

"A reduction in Government investment would lead to the loss of our brightest talents to competitor countries who are maintaining or increasing that investment," he said to the assembled audience of national news journalists.

"Funding cuts - even if short term - would markedly reduce the attractiveness of our universities to the individuals who serve the country in the following ways:

When asked about the Government's proposed cap on immigration for students, he said: "The international diversity of universities is also absolutely essential; if the UK ceases to top the global league tables, we will fail to attract and retain either student or staff talent from overseas. At Queen Mary, almost half our post-doctoral researchers are recruited from outside the UK, and in the USA, universities have largely based their success on foreign talent - it is a proven means of improving research."

On the subject of public funding for so-called 'blue skies' research, Professor Gaskell was particularly strong. He said: "It's worth emphasising that the issue of rebalancing the sources of funding is not a simple one. For example in medical research, it's not simply a question of saying, 'well we'll reduce the public contribution and the charities will pick up the slack'. There is a finely balanced partnership between public funding, commercial funding and charity funding, which serves the research community well. Pull one of those strands and you upset the affect sustainability of the other two.

"We should also be aware of making too simplistic a distinction between blue skies research and applied research.  A perfect example exists at Queen Mary where, about ten years ago, some basic bioengineering research led to the establishment of a small spin-out company developing materials for artificial bone grafts. This company was nurtured and eventually sold in 2010 for up to $330 million, with significant comeback for the College. Without investment in this blue skies research 15 years ago the company, Apatech, would not exist and their important biomedical product would not be helping thousands of people needing artificial bone grafts and replacements."