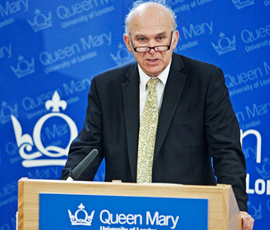 Dr Vince Cable, Secretary of State for Business, Innovation and Skills (BIS) and President of the Board of Trade, warned the Government could not fund "mediocrity" in scientific research and called for greater co-operation with business to help pay for the best.

Referring to the upcoming Spending Review, he said that over the next few weeks and months major decisions will be made on Government spending priorities. He told members of the science and innovation community: "The lazy, traditional way to make spending cuts is to shave a bit of everything, salami slicing. This produces less for less, a shrinkage of quantity and quality - I have no intention of going there."

Setting out the Government's approach to funding science, Dr Cable stressed that Government valued research - and spent £4.3 billion a year backing it. He stated: "My preference is to ration research funding by excellence and back research teams of international quality - and screen out mediocrity - regardless of where they are and what they do.

"I support, of course, top class 'blue skies' research, but there is no justification for taxpayers' money being used to support research which is neither commercially useful nor theoretically outstanding," he continued.

"The key is to find ways of transforming research into innovation. The UK has a strong record but we need to do more. This involves building stronger links between the UK's science and research base and the business community; to create more spin-out companies; and to provide a magnet for attracting overseas investors to the UK."

Queen Mary's Principal, Professor Simon Gaskell, who introduced Dr Cable, said: "Here at Queen Mary, we will continue to aim high, to achieve our twin aims of knowledge creation and knowledge dissemination. We are keen to encourage the best scientists to come to our university, develop a distinct niche 'to compete in a smart way' and face the challenges of the future."

He went on: "We are committed to investing in research areas characterised on a rational basis as being of the highest importance, to international initiatives such as our major joint programme with the Beijing University of Posts and Telecommunications, and to forming closer ties with businesses. This will allow us to strengthen our unique skills and expertise, maximising discoveries, partnering and licensing, and our successful spin-out companies such as ApaTech and Retroscreen."

The Queen Mary BioEnterprises Innovation Centre is the culmination of a four-year £30m partnership between Queen Mary, University of London, and the London Development Agency (LDA). The Innovation Centre is the largest facility inside London to offer both incubation space and follow-on space for commercial science and technology companies to work in close proximity to a leading London medical school and hospital trust.

At the Innovation Centre, the fit-out of 1,300 m² of open-plan labs and office space was completed on 1 September 2010 and is now available for young science companies. Modular internal fit-out architecture, with services mostly in ceilings rather than in walls, allows the lab and office space to be easily adapted, expanded and downsized.

Another 1,300 m² of space is being presently fitted out for existing Queen Mary spin-out and biotech company, Retroscreen Virology Ltd, that is wishing to expand inside London in January 2011. This purpose-built innovation floor will comprise Research and Development (R&D) labs, associated administration space and a 25-bed clinical trials facility with support facilities for medical staff.